CONVOCATION 28 JUNE 2015: 20 years of the Genocide of Srebrenica

Legacy of the Balkan Wars 20 Years after the Genocide of Srebrenica
Women in Black maintain that all wars have a prior period of preparation, usually based on concealed interests; that wars do not end with a cease-fire and disappearance from the media, and that the greatest part of the quiet work of reconstruction of the social fabric falls on the shoulders of the women.

It will soon be 20 years since the end of the wars in the former Yugoslavia, a country in which 21% of the people were joined in mixed marriages and after the peace treaties many did not know to which ethnicity they belonged, a result of wars provoked by nationalism, with a history of partisanship, to form ethnically pure nation-states and the creation of frontiers that separated their peoples.

Some 200,000 people died and approximately two-thirds of the population was displaced. Historical buildings of incalculable value were destroyed. Many assaults on human rights were committed, including torture and assassinations. Raping of women was used as a weapon of war and ethnic cleansing, violations that have not been brought to judgment and remain in impunity.

The wars ended with a great part of the former Yugoslavia reduced to poverty and in economic crisis. At present, some countries are on the verge of bankruptcy. 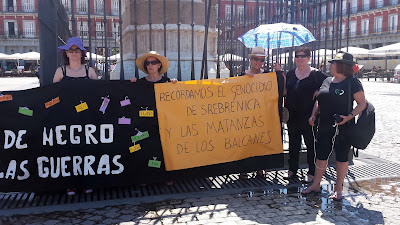 This coming 11 July will be the 20th anniversary of the Genocide of Srebrenica in which males between the ages of a few months to 80 years old, some 8,500 individuals, according to the official figures, or 10,500 according to the association of Women Victims of Srebrenica were assassinated. As at each anniversary, in the memorial ceremony the cadavers of those identified during the year will be buried.

Meanwhile, the various societies and officials of the new nations show consideration for and treat the war criminals as heroes. Military commanders who fought in opposition are now allies to assassinate the gypsies who witnessed the massacres or to negotiate on the black market.

Likewise, we observe that the European Union sets criteria of a fiscal nature for the new incorporations, while it also contemplates impassively the resurgence of nationalistic violence and aggressions towards the activists for human rights in Serbia.

During the recent Tribunal of Women of Sarajevo, the effects of the war on the women and society have been judged, effects that are not taken into account in the traditional courts. The nationalistic wars of the Balkans have sought to erase the memory shared among the women and they, who are not immune to the ideology and nationalistic propaganda of the states and the governments, work to neutralize the logic of blocs to stand up to that contamination. They opt in favor of cooperation, to create alliances and solidarity networks facing state policies for homogenization. For them it has been a milestone to overcome those boundaries, fears and intimate prejudices imposed by the leaders of the new nation-states.

Women in Black of Belgrade* assure that in order for the mentality to change, it must be understood that violence is not an exit. In war, there are no victors nor vanquished. The experience of war in the former Yugoslavia has showed that the civil population is the greatest victim and are those who lose the most, that is better to prevent war than to heal its consequences. The only solution is dialog and negotiation and understanding that human rights are indivisible and universal. Every person who chooses nonviolence and dialog initiates the way and assumes their part of responsibility to defend those rights.

*Zene u crnom Beograd (Women in Black of Belgrade)

Plan of events organized by WiB Belgrade during June-July 2015

Twenty years since the genocide in Srebrenica