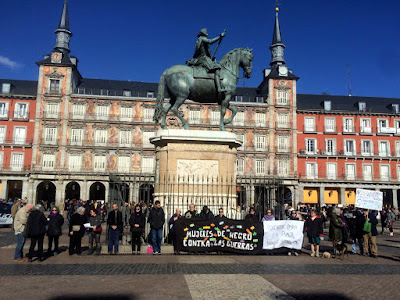 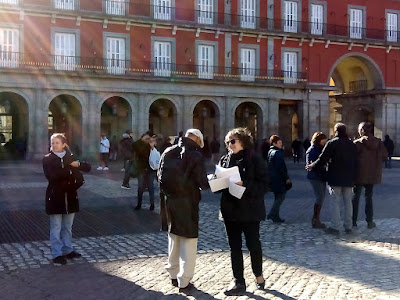 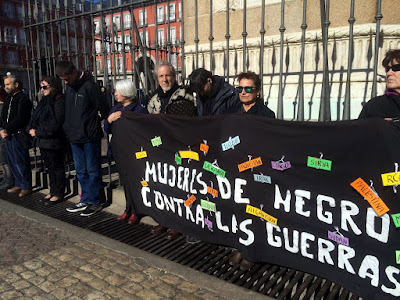 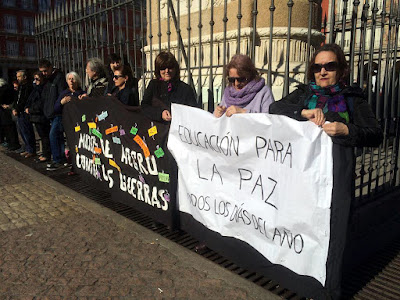 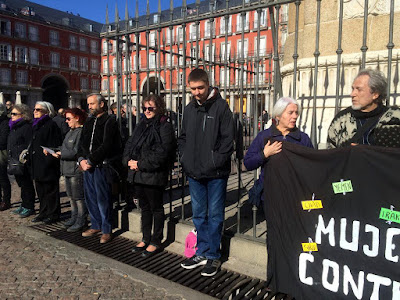 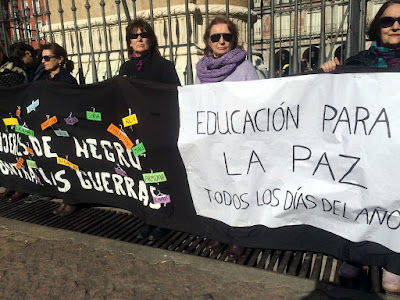 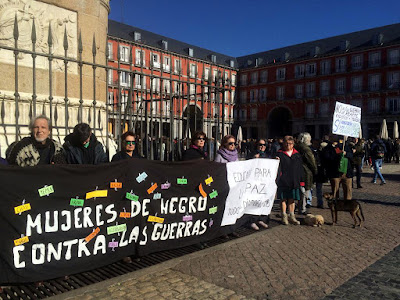 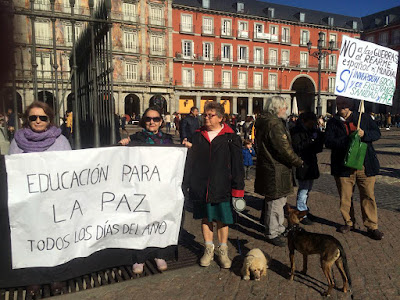 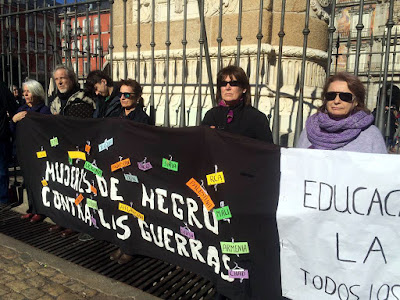 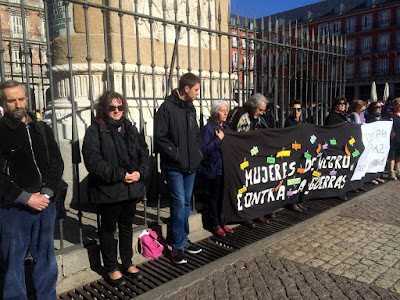 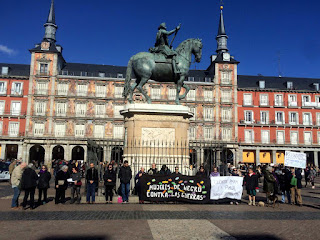 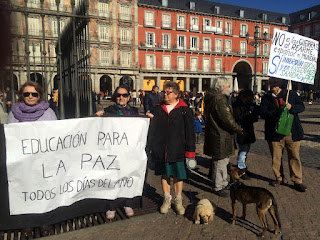 30 January:
School Day of Nonviolence, in memory of Ghandi

The School Day of Nonviolence is commemorated on 30 January in memory of Ghandi and the values he represents. From our feminist, anti-militarist and nonviolent approach, we are convinced that one must work for peace and nonviolence every day of the year.

We believe that war is not innate to the human being, rather a cultural response developed and fed by the powers that be. Being a learned response, we must make ourselves aware of our power and opportunity to unlearn it, to not use war to resolve problems.

One lesson is to internalize the fact that peace must be real in the entire planet. It doesn’t do any good to live in a country where there is peace while contemplating wars in areas that are more or less distant. It must be taught in schools to think about how everything is related in this world and every war affects the survival of the planet. That it’s not enough to be against violence and war and that in the classrooms one must analyze the causes that produce wars in order to avoid them:

♀ If we enrich ourselves at the cost of exploiting the resources of other countries, it will only generate more poverty and destitution in these poor societies, which will cause them to have to seek a situation with more opportunities for a life with dignity, to become emigrants.

♀ If we manufacture and sell weapons, they will be used against the people, their cities or countries and they will become refugees. But when they come to our borders, they find walls and fences, forced return and refusal for asylum in violation of signed international laws.

♀ If it is permitted to backpedal regarding the equality of women to rise to power, as is happening now in Andalucia, those parties are responsible for institutionalizing a policy of violence towards women by an organization of the State. In Spain and the world over women have been considered the property of men and discriminated against through the centuries.

♀ If we take the armies to the schools to talk about peace, we put the work for peace in the hands of the very people who have been trained to make war.

♀ If one doesn’t question the social values of violence that produce fear, social control, male chauvinism, blind obedience, resolution of conflicts through violence…one builds a society without peace and a broth to cultivate the creation of imaginary enemies.

♀ If one doesn’t work against the resurgence of macho values and increase of the power/submission patriarchal relationships among the student body, school is distancing itself from working for peace.

♀ If not denounced, continuing cuts in the budget for public education while increasing funds for private education, leads to social exclusion and reduction of opportunities for the least favored sector of the society.

Women in Black want schools that collaborate in building a society that will struggle for peace and against wars, so we think that:

♀ Work that our predecessors accomplished against war and for peace must be included in educational programs to serve as a model and point of reference.

♀ They must collaborate in unlearning the responses of violence in the face of conflicts and foster solidarity and justice without borders.

♀ It is urgent and necessary to strengthen the work of education for peace with a gender perspective, which has as its goal the formation of nonviolent persons.

It is necessary to work in the schools and in society for an equality so as to not repeat violence or the power of the patriarchy. All and each one of us is responsible for seeing to it that the culture of war disappears from our lives and from history. 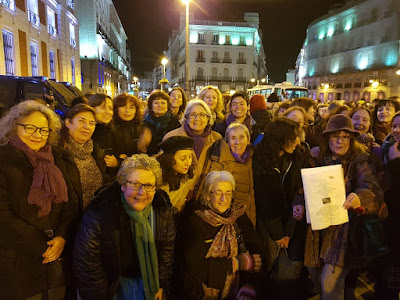 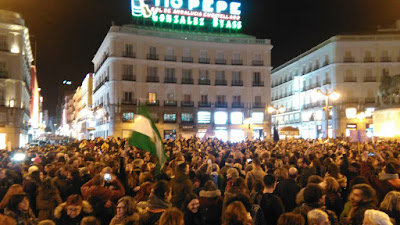 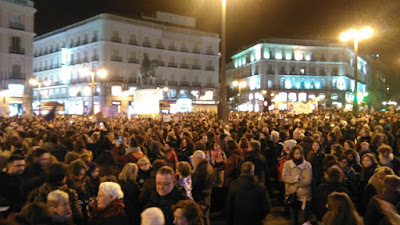 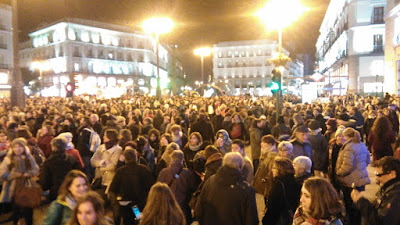 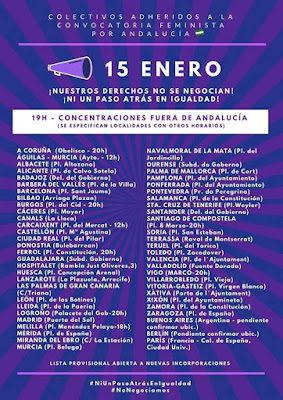 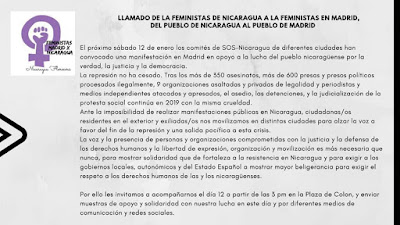 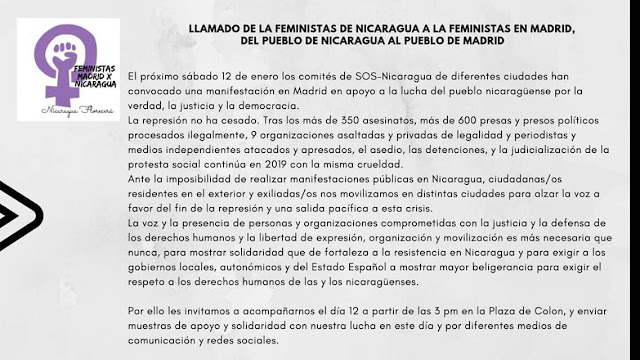 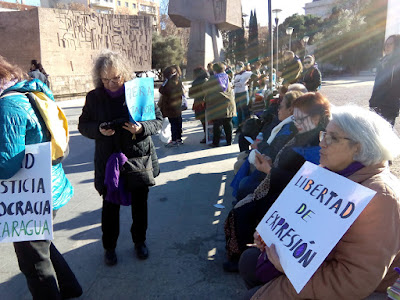 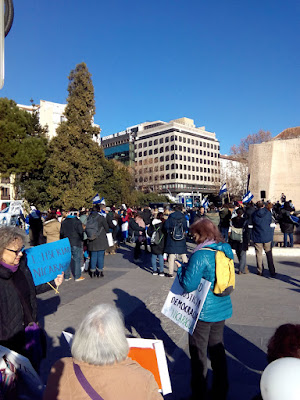 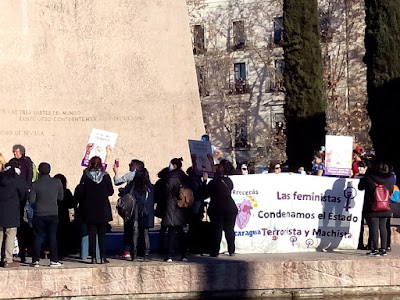 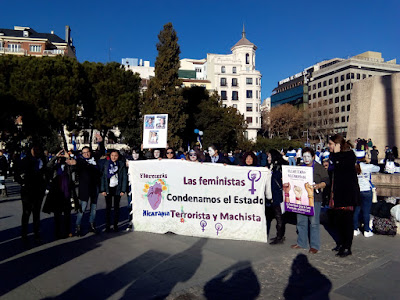 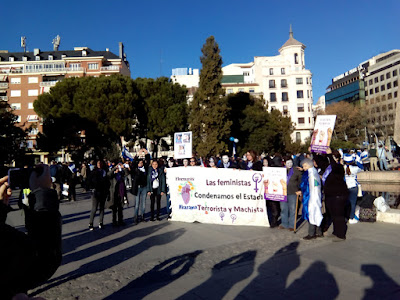 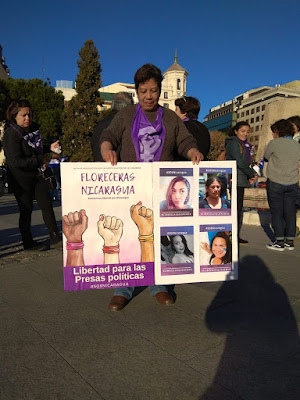 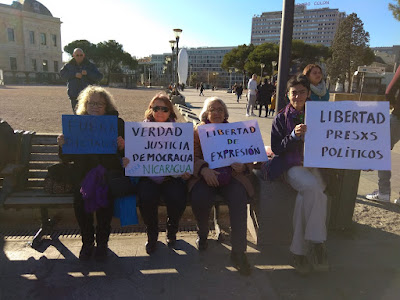 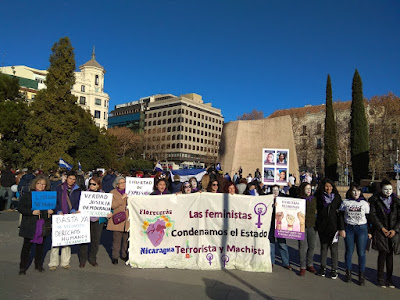 Letter to the International Network of Women in Black against war

Letter to the International Network of Women in Black against war

A hundred and four years ago, more than one hundred English pacifist women wrote a letter to women in Germany and Austria calling for working together for peace.

At the beginning of 2019 we, Women in Black Against War from Madrid, believe that it is necessary to make a new call for peace in Europe.

We are concerned about the rise of fascisms that are taking advantage of popular discontent to grow in Europe. The far-right parties hold openly xenophobic, retrograde and anti-feminist speeches that are complacently permitted by the political and economic elites and reproduced uncritically by the media, giving the impression that those speeches are as valid as any other political position. But they are not. It is not acceptable the degree of dehumanization and backwardness that the messages of the far right contain and that are gradually penetrating in European societies, as it happened 80 years ago.

But we are even more concerned that Europe is at war here and now. Yes, Europe is at war on its borders. It is an open war against migrants and poor people, refugees, people fleeing hunger and climatic disasters. It is not a war that has been declared in international forums legally, or that is fought with bombs and missiles, but it has been killing thousands of people for years. Europe carries out war actions whenever a small boat with dozens of people is not rescued, leaving it to sink in the Mediterranean Sea; every time a safe harbor is denied to a rescue boat full of people, contravening the basic pillars of international naval law, or whenever a country closes a border with fences.

The European Union does not stain its hands with blood, because we Europeans are civilized. These services are outsourced and carried out by Morocco, Turkey or Libya. For example, the agreements with Morocco include financial aid and the implicit commitment that Europe does not question the abuses of Human Rights in the country. In return, Morocco accepts the “hot return” of migrants detained in the fence of Ceuta and Melilla, or even people already detained in the continent. It is known that sometimes the way to "manage" the problem that Morocco has had is to abandon them on its southern border, in the Sahara desert, without water or food, that is, Morocco has applied them a slow and inhumane death penalty.

The situation of migrant women is even worse, because in addition to being exposed to the same hardships, they are harassed by sexual violence, trafficking and the lack of specific resources for women. If migrants in general find thousands of obstacles to reach their destination, migrant women bear the brunt for they are victims of all kinds of abuses just for the fact that they are women.

Also children who are forced to leave their home and their family in search of a future are innocent victims of this war on the border. When they arrive in Europe they are harassed as criminals and denied their most basic rights: to education and dignified living conditions. Unaccompanied minors often end up sleeping on the street, where they suffer violence of all kinds and are forced to scrape by begging or committing petty theft, as Oliver Twists of the Twenty Fist Century.

We European anti-militarist and feminist women cannot remain silent in front of the European fortress that is being built around us. We do not want to be moral referents of anything, but we cannot stand by. Welcoming thousands of migrants is not charity, it is justice, because we are aware that our level of life and waste is based on the plundering of other peoples and territories. That is why we want to appeal to all the women of the Network so that, with regard to the forthcoming European elections, in resistance against xenophobic migratory policies, they will join the European action of May 5, “The embrace of the Peoples”.

We believe that another world is possible, that we can build a society based on Human Rights and a society that welcomes people with generosity and empathy wherever they come from. We also believe that we can create other economic relationships that do not imply the depletion of natural resources or the exploitation of others. We want to build new ways of living respectfully with others and with the planet. We want to build a better world together.

Women in Black Against War – Madrid