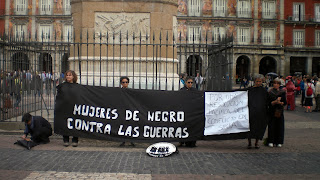 Against military intervention in Syria

Once again the guardians of democracy rise up as saviors, in this case, saviors of Syria. But when they speak of helping the Syrians, they speak of military support to the insurgents in order to defend their own interests in the area. While peaceful protests lasted, the international community looked aside. When Asad crushed them harshly: the uprising of the children of Deraa, the sit-ins and demonstrations of the young people and the country folks, there was no great echo in the conventional media.

The conflict in Syria is not a conflict between good people and bad people. Al Asad is a lay dictator, but a dictator who has previously violated human rights with the tacit approval of all world leaders, and during this war he is carrying out a massacre of his citizens. On the other hand, the insurgents are a group of religious fanatics, foreign mercenaries, financed in large part by third countries and one and another rebel – one more conflict in which the civilian population is being quashed.

Al Asad was repressing his fellow citizens and destroying the homeland at the same time that those who sold weapons (with tacit approval of the governments) continued with their transactions, despite being aware of the fact that these weapons were being used against the civilian population.

They propose to bomb Syria but have no plans to help the millions of refugees, nor to protect the civil population trapped between two military forces (the army of Al Asad and the insurgents) and that suffers the consequences of a conflict that has little do with them and a lot to do with the strategic geographical interests in Syria on the part of the great world powers (gas pipes, proximity to the Middle East…).

♀ That there be international political intervention to end the conflict.

♀ A peaceful resolution to the conflict through consensus on political alternatives, which includes all the civilian voices involved.

♀ That they stop selling weapons to the government of Syria and cease giving them to the rebels.

♀ That the officials who have influence cease seeking their own personal interests and defend those of the Syrian people.

♀ That the civil population be protected both from military aggression and hunger, poverty, forced emigration, etc.

♀ That there be no impunity and that Al Asad and the rebels be accountable in court for their crimes against the population.

♀ That the government of Spain, instead of rescuing the banks, take part in humanitarian assistance for the Syrian refugees (up until now, they have given them zero euros, while the military expenditure in 2012 was 18,671.79 million euros).

Let us remove war from history and from our lives 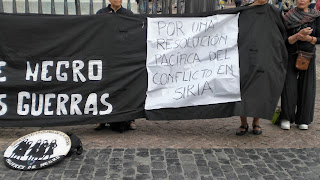