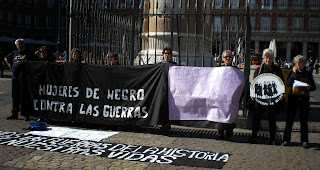 On 31 October 2000 the Security Council of the United Nations indicated preoccupation regarding the fact that civilians, especially women and children, constitute the vast majority of those who are harmed in armed conflicts. The patriarchal and militaristic character of Resolution 1325 is reflected in the fact that it deals almost exclusively with the theme of war and military conflict as a permanent state of affairs, natural and inevitable, which is contradictory with the role of the UN to maintain peace and security in the world. We believe that with this Resolution, the UN is attempting to glamorize war and at the same time offers war as an alternative for the resolution of conflicts and wars, in short, perpetuating them. We maintain that war and the militarism that it generates are the main enemy of civil society, of women and children, with the result that war will always be their principal enemy. After cease fire in a war, the UN sends in the Blue Berets, humanitarian
Publicar un comentario
Leer más
Más entradas