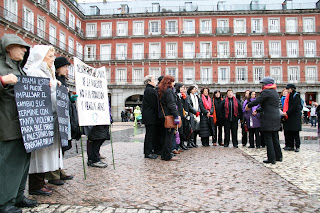 CONVOCATION 20 JANUARY 2009: MR. OBAMA, YES YOU CAN COLLABORATE FOR PEACE IN THE MIDDLE EAST

- enero 18, 2009
Women in Black groups of Madrid and Belgrade , common convocation Letter MR. OBAMA, YES YOU CAN COLLABORATE FOR PEACE IN THE MIDDLE EAST Mr. Obama, For years, Israel has engaged in a policy of generalized colonial war against Palestine: the war in Gaza, the Wall, the settlements in Trans-Jordan, the usurpation of water and other resources, in great measure because the governments of the USA have supported and permitted it. The United States is responsible for the continual violation of the resolutions of the United Nations and international treaties on the part of the governments of Israel. This war policy has caused the civil society of Palestine to live under the boot of oppressive militarization of the Israeli governments, as well as that of its own governors; and the civil society of Israel under the boot of oppressive militarization of their own. This policy of violence and humiliations increases the pain, the hatred and the zeal for revenge, causing a radicalization of a
Publicar un comentario
Leer más 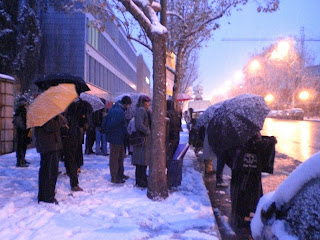 - enero 06, 2009
Women in Black against the war - Madrid invite you to a vigil in black and in silence Friday 9th January 2009, 6:00 - 7:00 p.m. IN FRONT OF THE EMBASSY OF ISRAEL (Madrid) C/ Velázquez, Nº 150 Metro: República Argentina y Cruz del Rayo FACING THE WAR IN GAZA Women in Black Against War (Madrid) cry out: To the government of Israel, ♀ that they stop the war in Gaza ♀ that they draw a halt to the policy of war in Gaza and the Occupied Territories ♀ that they comply with the resolutions and treaties of the UN, Rome and Geneva. To Hamas, ♀ that they cease firing rockets and concern themselves with the interests of their citizens. To the government of Spain and the European Union, ♀ that they stop the war in Gaza ♀ that they not permit the Government of Israel to perpetrate more violence with impunity ♀ that they cease the sale of weapons. Let us expel war and violence from history and from our lives C/ San Cosme y San Damián, Nº 24, 2º 28012 – Madrid Tr
Publicar un comentario
Leer más

CONVOCATION 4 JANUARY 2009: FACING THE BOMBARDMENT OF GAZA By the Government of Israel