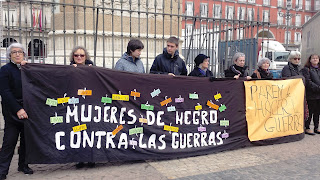 STOP MAKING WAR! Women in Black continue denouncing in 2017 all militarism and wars because they do not guarantee just and sustainable human development. We do not believe in armed struggle because it perpetuates the law of the most powerful. We are living through a process of collective failure at the moment of resolving conflicts: new threats and emergencies -- a worldwide refugee crisis, increase of social militarization, the barbarity of terrorism and its policy of instilling fear, all of which extend and provoke polarization and very dangerous demagogic politics. There is war in Syria, a situation that seems to have no end after 6 years of combat that has produced thousands of deaths, millions of persons displaced, and thousands of children disappeared. The recent attacks in Turkey seem to be a prelude to more violence in the future. Afghanistan is experiencing continual armed confrontations of sectarian violence. South Sudan is experiencing ethnic violence. The war in Yeme
Publicar un comentario
Leer más
Más entradas