Let's end expenditures for the military 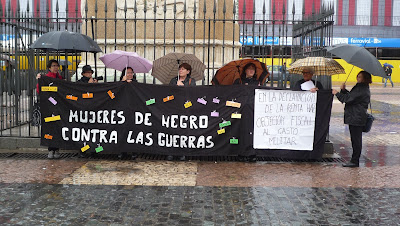 The economic crisis that we are still suffering assumes large cuts in all public services. While austerity has been sold to us as the only way, the reality is that expenditures for the military have increased. Although the budgets for the Department of Defense appear lower each year, they systematically enjoy an increase in the middle of the year, in addition to all the military expenditures that are not included in said ministry, such as, among others, interventions abroad that are paid for by the Ministry of Foreign Affairs or the purchase of weapons financed by the Ministry of Industry.

Beyond economic considerations, we are against war, all militarism, because it sustains the established patriarchal order, a system of domination and injustice that does not guarantee just and sustainable human development. We do not believe in armed struggle, because it perpetuates the law of the most powerful. Militarism feeds the normalization of violence and devalues the care for life in all its integrity; it maintains a view of the world as a dichotomy, division between us/them; to die/to kill; with me/against me.

Production and commerce in armaments fuels all the armed conflicts. While in the last three years, the Government has cut back 62% of the Official Assistance to Development, in 2014 it dedicated 890 Euros per citizen for military expenditures.

We express our concern regarding the investment of public money for military ends. While countries continue to designate resources for research and production of weapons and the only model the international community can envisage to resolve conflicts is military intervention, another world will not be possible.

♀ Wish that urgent measures be taken to eliminate research, manufacture and sale of arms. This commerce fuels violence and the conflicts that devastate humanity and condemns thousands of persons to flee and, upon attempting to save their lives, encounter death.

♀ We invite you to participate in the Campaña de Objecion Fiscal al Gasto Militar en la Declaracion de la Renta* (Campaign for Fiscal Objection to Military Expenditures on the Income Tax Form), as a means of serving Peace. It is hoped that “Not one euro, not one woman, one man, or one thought” be destined “to war”. 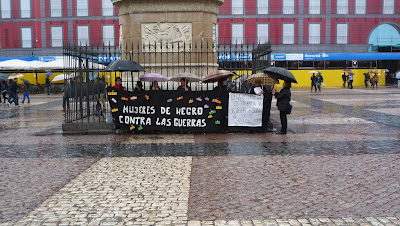 Military expenditures for schools and hospitals instead
(*) For more information about the campaign see:
www.nodo50.org/objecionfiscal/
www.grupotortuga.com/
www.educarueca.org/