CONVOCATION 29 October 2017: About situation in Catalonia

"As a woman, my country is the whole world"

Women in Black of Madrid are very worried and disturbed by the current situation in Cataluña and in the rest of Spain.

We are also perplexed that all the other problems that plague our societies have disappeared from the media and the concerns of the governments as if they no longer existed.

Both governments say they speak in the name of the people when in reality they speak in the interests of their own party. And between the two of them, they have succeeded in causing us to consider ourselves enemies of one another.

Intimidation, fear and violence, the same tactics they use to confront the conflict through force, is pure militarization of conscience.

As Women in Black we do not want them to divide us, to separate us as if we were enemies, and to make use of force: Not in our name nor with our money!

As Women in Black we want:

♀ To resolve conflicts in another way: to listen to each other, taking care with the manner in which things are said and done, avoid adding more fuel to the fire.

♀ Extend bridges between people and communities, put oneself in the shoes of the other person, know their priorities and try to understand them, meet as women without borders.

♀ Work collaboratively to achieve social progress and progress for women.

♀ Ask the governments to really work for the people rather than divide us more than they have already done.

♀ We call out against the launch of exceptional measures and impositions by both of the parties, and appeal for dialog and democratic, participatory negotiation. 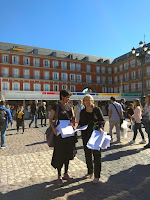 Women in Black, based on our feminist, anti-militarist and nonviolence platform, express our conviction that alternatives must be sought to learn how to preclude conflicts resulting in more violence, rather seeking greater equity and justice for the civil society.

It is not enough to be against violence and war. One must analyze the causes that produce wars in order to avoid them.