CONVOCATION 26 november 2017: No to Weapons Fairs

Desarma Madrid
No to Weapons Fairs

This past 14 March, 19 activists organized a nonviolent action at the doors of IFEMA (International Foreign Exchange Master Agreement) in Madrid to protest against the weapons fair of HOMSEC 2017 (International Trade Fair for Security Technology), an event that gathered arms merchants and agents, public and private, who benefit from the business of war; private military security enterprises and video surveillance enterprises like Navantia or ISDEF (International Defense and Homeland Security), among others.

In its communication with IFEMA, the platform of Desarma Madrid (Disarm Madrid) demanded the cancellation of the event and called for the use of the public spaces to promote a culture of peace and not as showcases for war and violence.
During the action, several banners were unfurled at the door displaying the motto “Disarm Madrid” while six persons – the number of this edition of the fair – sprayed themselves with red paint to represent the blood shed by victims of wars. Another more numerous group carried posters with the names of some of the countries where those weapons are being used – Syria, Libya, Yemen, Palestine, and Iraq, among others. The police intervened and arrested 19 people.

Months later, the Government Delegation issued fines totaling 11,419 €. It is ironic that the Organic Law for the Protection of Citizen Security (popularly known as the “gag law”) is used to criminalize those who in a nonviolent manner denounce the barbarity of war, and that the Spanish legislation that establishes that authorization for exporting arms should be denied if they can be used to disturb the peace, stability or security in any global or regional area (Ley 53/2007) is forgotten. 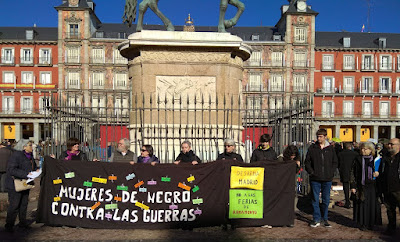 ♀ We refuse to accept that public spaces be used to accommodate events that foment the culture of war.

♀ We reject repressive models of security centered on military threats to the territorial and political integrity of the States.

♀ We believe in a model of human security that defends the right to a life free of violence, poverty and fear.

♀ We want an integral model of human security that includes other security aspects such as economic, food and environmental.

If to denounce that the government of Spain does not respect its obligations with regard to human rights, is to disobey...

to denounce that the warlords enrich themselves at the cost of the suffering of millions of people throughout the world, is to disobey the law...

We will continue to disobey!
No to the Gag Law!