The army cannot defend What we want to defend

Women in Black of Madrid consider that the army as an institution (we distinguish the military from the individual) does not defend what we want to defend. We want and we defend a society in which the State provides the conditions to ensure that all persons have the same rights and opportunities.

We are experiencing an economic crisis in which those who govern develop policies that protect those who are responsible for the crisis and encumber the citizens with its consequences; they shield the financial structures and protect the large companies, which continue earning profits, while the situation for workers is more and more precarious and poverty increases. They want the structures of the State to be coffers for making money for the few and privatize education, public health, the justice system…They reduce social rights obtained through the years, such as workers’ rights or abortion, and give more power to the Catholic Church; they have squandered our resources with bad management and at the same time they have favored the creation of corrupt networks and have usurped with impunity large quantities of money, without returning what was stolen.

Two years ago, the citizen group 15M took indignation to the streets, took over the plazas and converted them into agoras. Such assemblies have been repeated in the hospitals and in the universities sharing sentiments, analysis and nonviolent alternatives – a strategy through which all persons, from the elderly to children, have been able to participate in the discussions, demonstrations or sit-ins. Listening to one another, we have respected and learned from each other; we have been more imaginative upon uniting our efforts; we have demonstrated that they are not fooling us, that things can be done in another way. We engage in activities that empower us and make us participants in our present and future, that help us to overcome fear and despair and preclude our feeling guilty because of the precariousness of our situation.

We know that violent reactions favor and reinforce those who are in power and have the weapons and that civil society, the weakest persons, always loses. 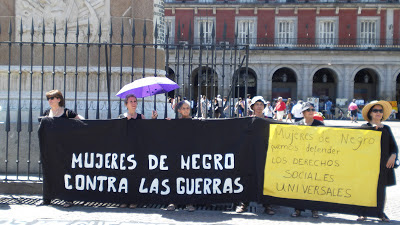 ♀ In nonviolent actions against housing evictions, defense of public schools, universal and quality public health; in the peaceful protests against banks and political entities; against labor reforms; against the criminalization of undocumented immigrants; in Fiscal Objection to military expenditures….

♀ In the denouncement of social militarization to which we are subjected.

♀ In the denouncement of the military expenditures of Spain, which have exceeded 18,000 million Euros.

♀ That there be no more impunity and that all that has been stolen be returned.


We want the response of society to continue to be nonviolent, so that every one of us emerges from this crisis strengthened.


We know that what has been destroyed over a period of years cannot be recovered overnight, but we say to those who govern that they are not defending our interests, rather the interests of those who have provoked the crisis.

THEY ARE NOT ACTING IN OUR NAME. YES WE CAN.