Policies to Achieve a Better World

The arms sector is an industry that doesn’t stop growing. It is a capital investment dedicated to generating death. Millions of people suffer daily the consequences of wars which no longer seem to surprise us, but who benefits from this business, this Spanish industry in armaments produced, among others, by Navantia, Airbus, Indra…?

The military industry of Spain, protected under the law of official secrets, functions in a fashion that is inefficient and opaque, with very high cost overruns and precarious employment. The majority of its production is dedicated for export, as in the case of Saudi Arabia, a country now pointed to for supposedly destining the arms it buys from Spain for war and the slaughter of civilians in Yemen.

There is a need in this world for peace and cooperation among the peoples who today, more than ever, are raising their voices. The cancelation of foreign debts is necessary, along with investment in strengthening the systems for health at a global level, mitigating illnesses like malaria; reducing inequalities in the social and economic spheres, and investing in green industries that commit to reducing environmental impacts in their processes and products. This will permit that international cooperation be understood as joint actions to enable reaching objectives towards caring for life at an international level.

At this time, there is a surprising difference between the multi-million military investments in the Military Emergencies Unit (UME) and the performance, almost without means carried out by activists with no more interest than that of respect for people and life. We should assign public funds for actions that permit rescuing alive people who see themselves obligated to cross the Straits of Gibraltar or the sea of Alboran in open boats for various reasons including the fortification of the southern frontier. The gesture to welcome persons is good. Generating a colossal military debt for the purchase of armaments or raw materials to make them is loathsome.

♀ We want to dismantle the trend towards investments in the millions for the military industry. If I have to choose, if I have to choose between unemployment, during which we are still alive, and the death of people on account of wars or displacements, I choose to invest in caring for life.

♀ We demand that our government and the European Union abandon military policies for restricting emigration which are now being carried out by UCRIF (Unity Against the Networks of Immigration and Forgery of documents), FRONTEX (European Agency for the Management of Operational Cooperation at the External Borders of Member States of the European Union) and OTAN.

♀ We support the initiatives of the civil society that have as their objective to encourage co-existence at the local, regional and global levels. In particular, we are in solidarity with all the activists and pacifists from Andalucia who denounce the instability of employment in the North American military bases; and with the activists who are defenders of human rights and have been harassed by the government of Spain for participating in the search and rescue activities, as in the case of Helena Maleno.

♀ For the good of their personnel, of its victims and of humanity, we demand the conversion of the shipyard and arsenal of Navantia to civilian industries that generate both employment and products that are of good quality and socially useful.

“Everyone should know that the Mediterranean Sea is a cemetery of unnamed refugees, the majority of whom are from Africa” 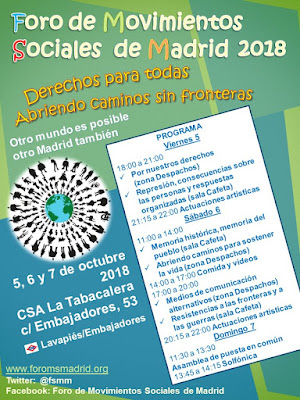