- enero 26, 2016
30 January, School Day of Non-Violence
Today we remember Gandhi and the values he represents. Women in Black of Madrid, as feminists and anti-militarists and based on our ideology of non-violence wish to say that the celebration of this day in schools must be continued in an education that involves all peoples throughout their existence. We yearn for a society where the utopia of universal human rights becomes reality. 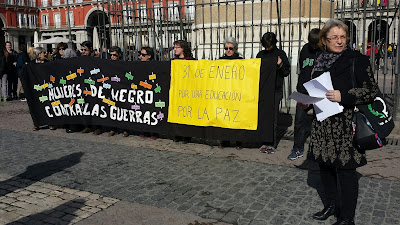 We seek a continuous learning in which we recover the acts and initiatives of all the people who have preceded us and who considered injustice, violence and war the cause of the evils of humanity, which is also our historic memory.

We espouse a school that will help to form people with a critical spirit who understand education for peace as a permanent process, tools that will contribute to the disappearance of militarism, patriarchy and nationalism, an education in which non-violence is a transformative force both individual and collective.

School should be a place where boys and girls become aware of the fact that if we do not universally respect human rights and seek only our own interests, we collaborate in creating more insecurity and fewer individual and collective rights.

We want an education for peace which will help us to:

♀ Review and respond to militarist policies for war employed by our leaders and which have led to destruction and suffering in entire regions as well as to the birth of violent groups or armies.

♀ Shed light on the consequences of the creation of new national borders and the closure of the present ones to people who migrate in search of a more secure and better life.

♀ Denounce the harm to society incurred by the reduction of civil and labor rights enforced by the world centers of power and our governments through various gag laws.

♀ Develop values with a gender perspective to form non-violent individuals. 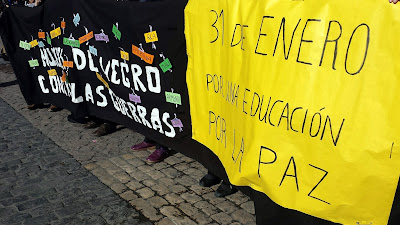 Women in Black of Madrid against war say:

Not in our name to:

• Militarization of schools, minds and society.

• An Education Law that seeks to mold persons who are non-critical, submissive and individualists.

Yes in our name that:

♀ Money for weapons and militarization be invested in public education, hospitals and social expenditures.

♀ Our governors and international leaders not resort to war nor foment militarism.

♀ Responsibility be assumed for the effects of all the recent wars on women, society, the environment and cultural heritage.

♀ In schools a real formation be formed in universal values and that action be taken so that gender policies reach women in the entire world.


...Inculcate in the souls of your children the most profound horror of anything that speaks of war. No longer leave in their hands those little boxes of lead soldiers that can coddle them to being a new Bonaparte. Do not encourage the constant resurgence of barbarism.
María Poscowink.
(Redención -feminist magazine-, October 1915)
Translation: Trisha Novak, USA – Yolanda Rouiller, WiB Spain