CONVOCATION 29 May 2016: Commemorating 24 May, International Day of Women for Peace and Disarmament

- mayo 27, 2016
Commemorating 24 May, International Day of Women for Peace and Disarmament

Militarism transmits and exalts macho values which in no way favor equity and equality of opportunity. It feeds the “naturalization” of violence and devalues caring for life in all its integrity, maintaining a dichotomous vision of the world.

This is why we have always opposed the idea of presenting the incorporation of women into the armed forces or their participation in combat as some sort of advance. From our feminist viewpoint, this constitutes an acceptance of patriarchal values and one more step in the continuing social militarization. The feminist-antimilitarist position aims for a society without gender domination and, by extension, no domination at all.

Based on these premises, we want to denounce the situation of the areas in conflict and that the measures taken by the international community are ineffective if not inexistent. While these measures go from arming the various factions in the conflict to organizing useless summit meetings to establish the basis of a hypothetical negotiation that never takes place, the civilian populations of Syria, Iraq, Afghanistan, Ukraine, Yemen, etc. continue to suffer the consequences of the war, militarization continues to expand and we see increasing silencing of voices that opt for nonviolent solutions to conflicts.

The situation becomes even more flagrant when we see how civilized Europe imposes policies comparable to those of any dictatorial regime regarding the refugees in the concentration camps of Greece and Turkey and, further, washes its hands [of responsibility] leaving the dirtiest measures to others (in this case, Turkey). 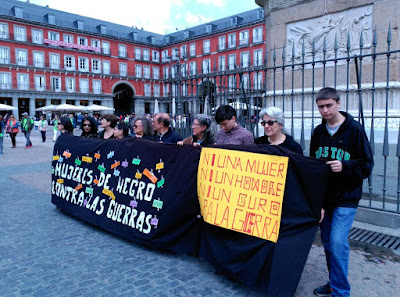 For all these reasons, we declare that:

♀ It is necessary and urgent to generate other policies to welcome and show solidarity with the people who are suffering in zones of conflict.

♀ Urgent measures should be taken towards the eradication of research, manufacture and sale of arms in order to cease this commerce that feeds violence and the conflicts that are devastating humanity.

♀ We denounce the patriarchal and militarist character of the United Nations Resolution 1325 and other similar ones that depict war and military conflict as natural and inevitable.

♀ We invite you to declare fiscal objection on the income tax form (Objecion Fiscal en la Declaracion de la Renta)* in the service of peace. By doing that, it is hoped that “Not one euro, not one woman, nor one man, nor any thought be for war”; that no euro be destined to manufacture/research weapons that kill human beings.


Peace is a fundamental value for the lives
of the people, the families and the nations of the world.
Translation: Trisha Novak

*Further information about this campaign (in Spanish):
www.nodo50.org/objecion fiscal/
www.educarueca.org/