CONVOCATION 27 November 2016: PEACE IN COLOMBIA IS THE PEOPLE'S PEACE

PEACE IN COLOMBIA IS THE PEOPLE'S PEACE

After 50 years of war – though never declared as such – with more than 250,000 dead and 6 million displaced, peace in Colombia must belong to the people.

Achieving peace is a long and difficult process that must not stop any step of the way. Among the steps is to reconsider the referendum that NO to peace was won by a very scant margin. And the process should also keep in mind the suffering and violence experienced by the civil population, especially by defenders of human rights and activists for peace who have been the victims of threats, kidnappings and assassinations.

We want that the voices that emerge from the civil population be taken into account, activist groups, communities and individuals who have been working for peace for many years with a feminist and antimilitaristic perspective:

♀ The peace process cannot be left only in the hands of those who have promoted the war (the various guerilla groups and the government; and including the paramilitaries whom no one mentions). The peace process must be demilitarized, allowing greater participation to the unarmed actors. Peace also implies social demilitarization because those who killed keep guns in their minds.

♀ To destroy the idea that war is not a victory of some over others is a benefit for all.

♀ It is essential to remove from the peace process political and electoral positions that strive to demonstrate who is more powerful. Everyone must be included, both those who favor “no” as well as those who favor “yes”.

♀ Recognize the process that took place in Havana, its advances and achievements, and make known concessions made on each side.

♀ Reject a return to war. The cease fire must be definitive in order to reach a peace without discrimination, racism and poverty in a real democracy. Peace is unstoppable!

♀ Maintain in the peace process a viewpoint of Transitional Justice, which includes recognition of the harms committed by all the armed actors, reparation to the victims for the harms inflicted and their participation in the process.

♀ Take into account the experiences in building peace and other local projects that have stayed strong in their wish for peace during the conflict: peace communities like San Jose de Apartado, the multiple feminist initiatives and those of the people; the Afro-Colombian initiatives for peace and the movement of conscientious objectors.

♀ The peace process should include the perspective of human rights of women and girls, as well as maintain the agreements that have already been reached in matters dealing with a gender focus. It is necessary to construct peace from the perspective of women, decentralizing power, eliminating patriarchal and militarist practices and seeking new strategies – cultural, artistic, ancestral and pedagogical. Women are important in the process because they have a bearing on the culture of non-violence, reconciliation and harmonious coexistence as central values of society.

♀ Request that the international community and the United Nations continue their accompaniment to the peace process.


“We refuse to accept war as the destiny of our sons and daughters.
Women and children declare that peace is ours also.”
(Ruta Pacífica de las Mujeres) 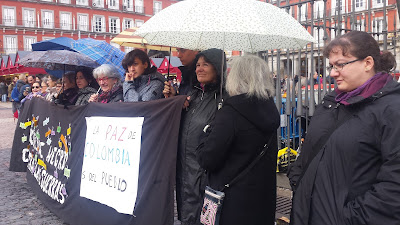 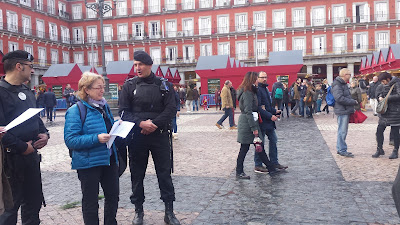 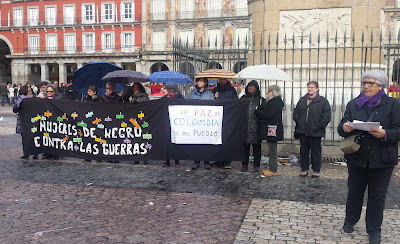