It is socially accepted that human security, and especially the security of women, is a matter for the Fuerzas y Cuerpos de Seguridad del Estado (State Security Force) and the military. We believe, however, that human security goes beyond military or police intervention. When speaking of security, one must also speak of food security, environmental, community, economic, etc. In both the spheres of family and of work, the life of women is conditioned by the violence exercised on them. A woman is killed or mistreated for not meeting the desired expectations. While governments consider that this violence is a private matter, it will always be present in our societies. Security is absence of violence against women and equality of access to political, social and economic power. The struggle against violence toward women must be incorporated into the security strategies for each country, locality, community and in all social groups.

Military expenditures do not give security to women, are an economic waste and militarize society. Such expenditures are useless and we believe that this money should be invested for useful social expenses. While the military expenditures of Spain, distributed throughout various items, was 42,000 million Euros in 2016, the budget to struggle against gender violence is 25.2 million Euros, and the lack of appropriation for dependents has resulted in their being almost 400.000 dependents receiving no assistance. And now we are hearing requests for countries to increase their contribution to NATO, while at the same time the solution overlooks doing away with these sorts of criminal organizations that are in favor of war, and it has been demonstrated that one of the major enemies of women is war. 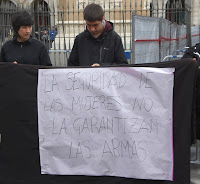 ♀ That the State consider the violence exercised against women as a problem of national security and that the government legislate to the end that one day women can live in security.

♀ That there be economic provisions to the Ley Organica 1/2004 de Medidas de Proteccion Integral contra la Violencia de Genero (law to protect against gender violence) in order to advance towards a society that is more just and egalitarian.

♀ That expenditures for the military be destined instead to social, educational, health, culture, cooperation and the security of women.

♀ A change in educational policies with an expansive and long term vision which will approach inequality of gender from the root of the problem.

♀ That national organizations like the UN see war as a threat to women and urge the governments to demilitarize their respective countries.

♀ That we realize that every person has a responsibility to stop violence against women.