CONVOCATION 28 May 2017: 24 May, International Women's Day for Peace and Disarmament

24 May, International Women's Day for Peace and Disarmament
International Women’s Day for Peace and Disarmament was established on 24 May 1982 by a group of pacifist, feminist and antimilitarist European women, who came together to protest the buildup of arms and nuclear weapons. Among others, the Greenham Common Women’s Peace Camp (England), was active from 1981 to 2000. 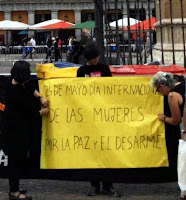 Women in Black consider war as the greatest perpetrator of all violence against women, society and the ecosystem. We feel that force and war constitute the language of power of any sort geared to continue that status and use it against women in a generalized way. It is the power that we have given them when we have allowed ourselves to be manipulated and deceived into thinking that war was a minor evil, that it was necessary. This deceit has taken root in government men throughout history, but women also have our quota of responsibility upon supporting that posture.

They have made us internalize that we are born violent and that violent responses, as in war, are innate. We maintain that violence is a cultural response, which is learned and therefore can be changed. This modification will begin when we opt for education focused on understanding that we are part of the whole and that all people together are essential to work and live in dignity, an objective which is desirable, possible and imperative. It would be a personal and social nonviolent transformation that would remove control from the powerful and benefit all people.

Throughout history there have been women who said NO and have opposed wars, who have disobeyed. They have seen that wars were waged mainly against them and what they most loved, their children, their family, their life. Women always lost whether they were on the side of the victors or the losers and always bore the most difficult role to reconstruct the new social fabric, increasingly arduous after every succeeding war. They are women who have defended the idea that children are taught from birth for one role or another and that warlike toys prepare children to exercise force and to think that war is the norm.

These are the women that we recognize and want to rescue from ostracism and do them justice, so that they will serve as a model to overcome the militaristic power culture in which we are educated and so that we don’t always have to start back at zero. We want to go on the record that there is another way to achieve justice, equity and solidarity. That is why we claim that there should be a chair at peace negotiations for women who bring their wealth of knowledge, so that Peace might be real, rather than just another distribution of power.

Today we give homage to all our sisters of the Network of Women in Black; all those who struggle against war, for human rights and the implementation of women’s rights in all the planet. We remember especially:

♀ The women in Scotland in an encampment against war and nuclear weapons (Trident submarines) at the Coulport military base 8-16 July.

♀ Our sisters of the Network of Women in Black, the Ruta Pacífica de las Mujeres in Colombia, and all the Colombian women committed to the peace process and banishing the culture of war that has been imposed on them in recent years. 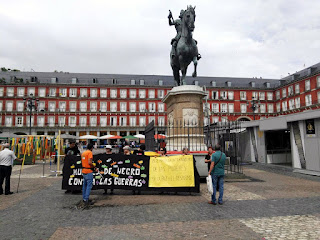