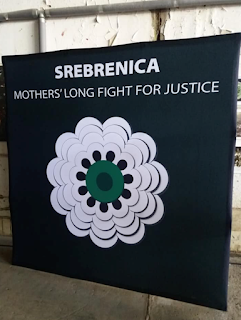 The International Network of Women in Black is very worried about the assaults that our colleagues in Serbia are suffering, caused by individuals and ultraright wing groups of their country with total impunity. These attacks happen one after another without the Serbian authorities doing anything to impede them or penalize the guilty. In recent months, our companions were not the only victims but there have also been attacks on journalists exercising their right to provide objective information, on activists who are defenders of human rights, and the citizens who demonstrate against these aggressions.

We feel that the men and women who dedicate their lives to defend human rights are key to the creation and maintaining of democracy, whom one must be protect and appreciate for their work. However, in the case of Serbia, a country that aspires to belong to the European Union, we see that the government of Vučić, instead of protecting these people, collaborates with those who perpetrate these aggressions, as is the case with our Serbian colleagues.

The most recent attacks took place during the peaceful demonstration using slogans referring to nonviolence in the Cvetni plaza of Belgrade, during which they took the banner the demonstrators were carrying with the message “Let us not forget the genocide of Srebrenica”, and they burned it publicly. In addition, there were groups that threatened and pursued the organizers of the demonstration to their houses, while the police showed themselves to be on the side of the attackers instead of being on the side of the law. Neither have they done anything to avoid the graffiti on the door and façade of the office of the Women in Black, insulting them and remembering the names of the nationalist Serbians responsible for the genocide who were convicted by the international tribunal of The Hague. Upon permitting these aggressions, the Government is diverting the attention of public opinion with regard to the responsibility of Serbia in the genocide of Srebrenica — precisely what the Women in Black want, as in their most often repeated message “Let us not forget the genocide of Srebrenica”. We think that normalization of this violence is a danger not only for the persons who are experiencing it, but for all societies that aspire to live in a democracy.

Our colleagues have been suffering attacks for 30 years on account of their opposition to the wars of Milošević. The attackers of today are inheritors of that regime. The current government of Vučić uses groups of fascists to terrify those who demand a real change in the Serbian politics.

·         That the Serbian government stop the assaults against activists who are defenders of human rights.

·         That the European Union make recognition of the genocide of Srebrenica a requisite for membership.

·         That our government support the activists for peace in Serbia.