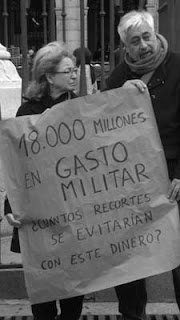 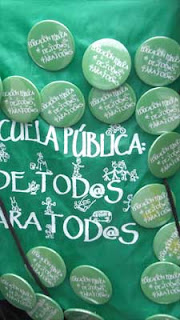 CONVOCATION 28 APRIL 2013: Facing the situation of unemployment or exile of the young people because of the economic crisis

Women in Black of Madrid think that the crisis is the pretext of our government to make budgetary cuts that oblige our young people to seek exile. Unemployment in this sector of the population has reached 57%.

At the same time, the conflicts that are now taking place in other countries oblige their citizens to leave their respective countries in search of a living. Being uprooted is a factor in both cases, as well as frustration at not seeing their expectations fulfilled. The budgetary cuts result in increased restrictions in immigration laws of the wealthiest countries; deny social services to the migrants, who are at the same time criminalized; close welcoming institutions; and abolish subsidies to some NGOs, who find it necessary to close down.

On the other hand, our country continues to export armaments, which is the same as exporting war, feeding this cycle of displacement and exile of the population. How many research projects; how much housing; how many training programs, improvements in health and education could become reality with the money that is spent on armaments? YES, IT CAN BE DONE. (SI SE PUEDE.)

We should demand of our politicians that they echo these requirements and not put the business of weapons before social needs. If they really want to represent us, they should stop this vicious cycle that impoverishes all of us, and boost investment in goods that redound to the well-being of the population, responding to the social needs and giving an example of honesty.

YES, THERE IS A SOLUTION. What is lacking is the will to carry out the necessary measures to change the direction of our economy and the policies dependent on it. We know that the business of war does not create employment, except for perhaps a few jobs locally. The benefit is only for the big enterprises that make weapons, an absolutely despicable business that could be converted into jobs that signify a real benefit for the world population. Wars not only terminate the lives of people but will also end the life of the planet because of its negative impact on the environment and because of the nature of existing weapons: nuclear weapons and weapons of mass destruction.

Even so, the only budget items that are not subject to cuts are the military. In our country the military expenditures have not only not experienced the announced 8% cut but also don’t correspond to the 6,316 million euros budgeted for the Ministry of Defense. It is calculated that it is at least 18,000 million euros, of which more than 12,000 million are hidden in sundry items of other ministries and organizations. If we invested that amount in reducing or canceling the cuts, surely our young people would have a future in their own country, because it is for sure that they are not leaving voluntarily, rather, with the pretext of the crisis, THEY ARE BEING EXPELLED.


"When the people refuse to cooperate, refuse to give help and persist in this disobedience and challenging position , they are denying their adversary the support and basic human cooperation that any government or hierarchical system requires. If enough people do it and do it for a sufficiently long time, that government or hierarchy will lose its power.”
Gene Sharp (Translated from Spanish)