CONVOCATION 28 February 2016: Advancing on the road to demilitarization and Peace

ADVANCING ON THE ROAD TO DEMILITARIZATION AND PEACE

This past 20 February marked the 27th year since the beginning of the movement for refusal to do military service (insumisión). On that day in 1989, 57 persons refusing to do military service presented themselves at courts to declare that they were not disposed to render service to the Servicio Militar Obligatorio (compulsory military service) nor to the Prestación Social Sustitutoria (alternate community service). These young people were confronting more than two years in jail, but despite this and the severe criticism that they suffered in the beginning, little by little they obtained impressive backing by the society, resulting in the Insumisión movement in Spain being unique in all the world.

This campaign of civil disobedience would continue until 2002 when the last of the insumisos were freed from jail. Military service was no longer obligatory but this resistance sought to highlight the ultimate objective of refusal to do military service: totally abolishing armies, military industry, production and commerce in armaments, and, once and for all, militarism as a means of resolving conflicts.

In these years, 20,000 young people publicly declared themselves insumisos, about 4,000 were tried and more than a thousand were jailed. Thousands of family members, friends, co-workers and school partners supported the young people and spread the word to disobey the armies. Many additional people were involved in various groups which, ever since then, have propagated the collective right to not take up arms and to confront wars in a non-violent fashion.

Although no country has seen an exactly similar phenomenon, today there are prisoners of conscience in various corners of the world: from Finland to Turkmenistan, from the Ukraine to the United States of America. Some of the most outstanding additional examples are:

Armenia: Jehovah’s Witnesses detained for refusing to carry out an alternative service.

Azerbaijan: prisoners accused as traitors for activities in favor of peace and reconciliation with Armenia.

South Korea: at least 635 conscientious objectors in jail, many of whom are Jehovah’s Witnesses.

Eritrea: for evading recruitment or deserting national service. Young boys and girls are recruited for the armed forces in this country.

Israel: Young people, both male and female, from various and differing collectives refuse to submit to military service or to act as part of the military in the Palestinian territories occupied by Israel.

These are just some of the data collected by War Resisters International WRI and Amnesty International. There is hardly any news from other countries with regard to persons imprisoned for being conscientious objectors to military service, refusal to do military service or desertion. But we do know of the existence of movements for nonviolence in various regions. The so-called “Arab Spring” consisted of peaceful protests on the part of the civil society against dictatorships and in favor of human rights. In Iraq, Syria, Egypt, Turkey, Palestine and many other places, movements for nonviolence have been buried or silenced by the violence of armies and military factions. 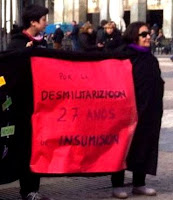 For this reason, we raise our voices to demand:

♀ Protection and support for the peace activists all over the world.

♀ The right to conscientious objection to the military structures.

♀ Liberty for imprisoned peace workers, both male and female.

♀ That recourse to weapons and militarism not be the solution to conflicts. 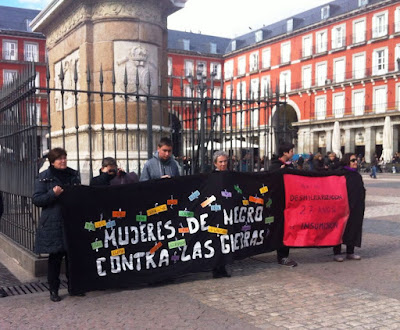