The world is dismayed at the development of this war provoked by the invasion of the Russian army into Ukraine, but our governments instead of encouraging negotiations to end it, send weapons for it to continue. Fortunately, there are voices for peace that are making themselves heard and deserve all our support: the FAS, Feminist Resistance against War, a movement that arose the second day of the invasion and which during these seven months has expanded not only in Russia but also worldwide, with activists and anti-war cells in more than 28 countries.

In Russia, their activities are a daily feat as they run the risk of being tortured or to end up in jail, despite which they are active in 60 cities, in which they help the people displaced from the Ukraine, distribute propaganda against the war, disseminating the information that the media hide, offer legal and psychological assistance to the victims, give speeches at international conferences, etc.

We Women in Black of Madrid support their proposals and applaud “Hope as resistance” that they present in their communications, because “hope permits us to act because it gives us back the strength and capacity for action” -- nonviolent actions to end this war, calling on the people within and outside Russia.

Women in Black of Madrid stand in solidarity with them and we disseminate their proposals, which are:

♀ To promote conscientious objection: to work with the defenders o human rights to dissemi-nate information about how to avoid military service, how to not go to a military training camp, how to enter an alternative civil service.

♀ Break the information blockage in Russia and continue the campaign against the war.

♀ Make known the practices of the GRAS – groups espousing a growing anti-war conscience.

♀ Re-enforce the interaction with organizations of feminists and Ukrainian and Byelorussian women, fortify their voices and needs, listen and learn to be allies.

♀ Support international cooperation: carry out global transnational actions against the war with the worldwide movements against war. 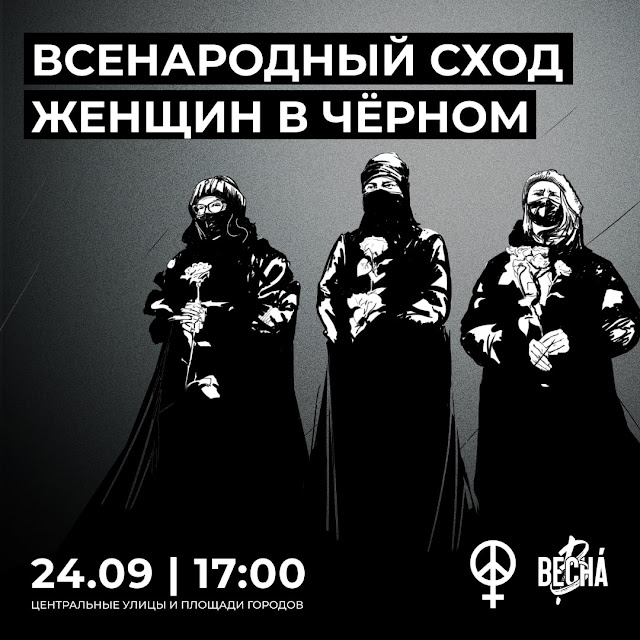